Sorcery of the Blood - Release date, cover art, and more

I'd like to start off by advising everyone to please follow me on Twitter because that's honestly where most of my book updates are going. I'm admittedly not great at maintaining a website. Anyway, so originally I announced on my Twitter account the release date for my book would be April 27th, 2020. It has now been changed to May 4th, 2020. I'm really excited and it's starting to feel more real to me now than when I first signed my contract back in November.

And here it is, the beautiful cover art that was created for my book. That I keep staring at because I kind of still can't believe that it's really happening. 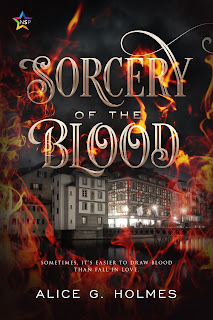 Isn't it gorgeous? I fucking love it so much. It has my name on it and everything.

Sorcery of the Blood digital copies will be available through NineStar Press, and you should be able to pre-order them on May 1st. Digital copies will be released May 4th. As for physical copies, you can obtain those from most retailers (and I for one can't wait to see something I wrote on the Barnes and Noble website. I will probably cry).

Speaking of crying, I had to have a talk with my father the other day. I'm going to mention now I probably won't get very personal on this blog often, but when I do it's going to be for stuff like this so buckle your seat belt.

I was excited about the book cover and texted it to him so he could see it. He said that he was going to buy a copy as soon as it was out. The thing is, while my Dad is aware I'm asexual, I hadn't told him that I'm non-binary/genderfluid. The main reason being I thought he'd flip his shit and disown me and he's the only person in my immediate family I'm still on speaking terms with. He's never gave any indication he would do so, but to be fair you never really know until you speak up.

However, my author's bio specifically says I'm ace and an enby. It hit me that if Dad bought a copy of Sorcery of the Blood, he'd be learning about my gender identity through a book that's also extremely critical of conservatives (which he is one). I decided that might not be the best way for him to find out. But I couldn't face calling him so I texted "oh by the way I'm non-binary".

The little typing window on the text screen seemed to stay there forever. I think he was trying to gather his thoughts. But what I saw next did make me cry in a good way. He assured me he still loved me, and even asked if it's okay for him to still call me his daughter (as I'm AFAB). I assured him it was fine and advised that my preferred pronouns are they/them but I'll answer to she/her or he/him.

Honestly what really got me was that he said, "oh maybe I shouldn't call you daughter anymore". Because I know if I'd come out to him about this five years ago, or even a year ago, he wouldn't have been nearly as nice about it. He still struggles with a lot of the aspects of, well, me, but gods bless him he's trying.

I'm quite lucky to have him as my father.

It feels a bit weird to be having this in the middle of a fucking pandemic too. I was going to go out to my favorite restaurant to celebrate the books release, but, much like my birthday party, that plan is now on hold. I almost feel guilty for being happy about something when there's so much suffering from Covid-19. But I'm trying to stay positive and this is one of the things I've been focusing on in order to do so.

Now to circle back. Sorcery of the Blood will be released in just a few short weeks. It's my first book, and it's a labor of spite. Which I mention in the acknowledgements and will tell you the story of when the book is officially out.

Until then, stay home, practice social distancing, and wash your hands.

Email ThisBlogThis!Share to TwitterShare to FacebookShare to Pinterest
Labels: behind the scenes, book updates, personal stuff, sorcery of the blood

It is with much excitement that I announce the pre-orders for Sorcery of the Blood are now live at NineStar Press! Follow the link below. If...

Alice G. Holmes
Alice G. Holmes is a queer disabled author trying to write a better world for everyone to escape to. They are genderfluid/nonbinary as well as autistic. Their first book, Sorcery of the Blood, will be released in 2020.